It strikes me as curious that as a species, we have developed a massive industry centered around keeping ourselves entertained. When you think of times and places where you would feel a need to be entertained, it’s usually someplace where you would be otherwise bored, for example, waiting at the doctor’s office, waiting in line at the DMV, or waiting for your plane to land. So is the underlying truth that life is just… waiting?

If you look back over my previous blog posts (and why the hell would you?) you will see that I am of the school of thought that this world is a school. We are here to learn something. Those of us that learn the intended lessons (ultimately, how to be godlike) move on to higher frequencies. Those who do not, get reincarnated right back here like kids that fail the 6th grade.

Why do 6th graders usually fail? Because they get distracted from the lessons. They get bored, and instead of paying attention to what’s really going on around them, they doodle in their notebooks, they play on their cell phones, they sleep, they find some way to avoid the intended message being delivered by burying it in the white noise of their idea of entertainment.

I find it hard to believe that humans were given the level of awareness that we have been given, in a world as complex and astounding as the one we are in, just to be bored to the point that the apex of our existence has been to develop a trillion-dollar industry to distract ourselves from the complex and astounding world that has always been here. And yet we have, and so now rather than engaging the environment we were meant to, we have created false environments meant as nothing more than distractions from the true environment, thereby creating a world in which we do nothing but pass the time as we wait to die. 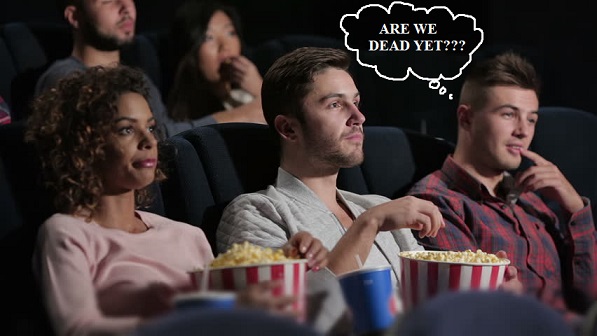 Movies, TV, video games, sports, politics… what have you. It’s all here as a distraction from the lesson intended, to cloud the true message. Like reading a magazine in the doctor’s office waiting room, we’re just finding minutiae to detach ourselves from our surroundings. Rather than experiencing being here, we are distracting our minds while we wait to move on. And then we die, and we have not prepared at all for the final test, and so we are redeposited right back here in this eternal prison of lower education.

Think about the tremendous strides we have made as a civilization. We’re killing the planet, and that’s “unstoppable.” We’re killing ourselves, and that’s “unavoidable.” But man, we can CGI the HELL out of a movie and make it indistinguishable from reality, so we can feel like we’re really seeing an ice zombie riding a dragon across Westeros. We can make a false reality that is so much more fun than the real one we are ignoring and destroying — and it doesn’t even really involve us. Is that why we think it’s so much better? And in that oxymoronic fake reality we made, we can kill anyone we want, and if we fuck it up, we can just respawn.

Hm. As above, so below, I guess. I’m not saying that we do not need some forms of escapism in coping with a steady dose of reality. As Sigmund Freud once paraphrased Theodore Fontaine, “[People] cannot subsist on the scanty satisfaction they can extort from reality.” Our minds are far too complex, and sometimes they need a day at mental Disney Land to stretch their boundaries and experience totally new ideas. However, the amount of escapism we have in our lives at this point is overkill. Why do we spend so much money on distracting ourselves with fake realities just so we can ignore more and more of the real one? On some deeper level, that seems incredibly short-sighted and counterproductive, an– oops, my download’s done. Time for Aquaman!

Killing our planet, killing ourselves, by simply killing time with a trillion dollar industry designed to do just that. We’re not learning, we’re just waiting for class to end. And in this metaphor, this means we’re waiting to die. The difference is, when you are waiting for class to end, it’s all you can think about. Yet no one likes to think about dying (aside from those annoyingly moody goth kids that everyone hates). Nonetheless, eventually, we all die, and we are woefully unprepared for it, so we have to do it all again. Just like the flunkies we are. When will this get so boring that we WANT to learn what’s going on in those higher frequencie– oops, Red Dead Redemption time! Gotta go join the game.

How often do you start a video game only to find another game within that game to distract you from the one you were supposed to be playing? It seems a big part of what our overlords are doing is developing a lot of new ways to distract us, to the point that news about the fake distractions are headlines running right next to real issues in our world. At this point, the fake news (by which I mean news about the new season of “Game of Thrones” or the latest video game) is actually replacing real news about discoveries that affect our very reality. Surely, we are heading to an event horizon where we will not even be able to tell the difference between what is real and what is distracting entertainment. And who’s to say this world we are in is not just some sort of simulated distraction itself? And if so, distracting us from what?

These questions need answers. In a few weeks, I will be heading to foreign soil where psilocybin mushrooms are legal… more or less. There, I will ingest copious amounts of these “magic” fungi and attempt to get to the bottom of this reality thing and report back here.

In the meantime… go do something else. Here is a mental exercise I recently invented: Sitting in a silent, comfortable room, close your eyes. Picture a room inside your skull, a sort of “mind-room,” if you will. Don’t try to design it in any particular way, just go with the first image of a room that pops into your head. What does it look like? Once you have a room, you will notice you are facing forward toward the “front” wall, because that is the way your mind’s eye is oriented. Focusing on the walls, try to turn your mind’s eye to the BACK wall, i.e. the back of your skull. Which way did you turn, left or right? Don’t just switch images to the back wall. Actually turn your mind’s eye like you are turning your head so that you see the details of the side wall go by, until you have achieved a full 180 degree rotation. It’s harder than it sounds. Now, what do you see at the back wall? If you see a door, open it and walk through. If a window, open it and climb out. A hole… start crawling. If you don’t see some form of egress, make one. Can you do it, and if you do, what’s out there?

Try this exercise again and again, until your mind-room becomes an elaborate escape room. Is it always the same room? Can you get out of it each time? Do you always get out of it the same way? Is the outside different each time? Is it sunny, rainy, or just another room? Does it change with your mood or recent experiences? Did you have an out-of-body experience, or did you die?

Once you have succeeded in a few escapes, think of any similarities, and keep them to yourself. I really don’t care. I am just trying to distract you from reality.

Apparently, there’s a lot of money in that. 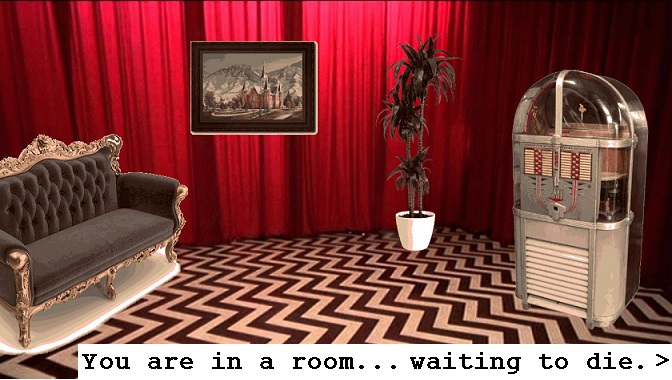 I am an ape living abroad, writing to stay focused and to remember the things I think about. I post them here in case you'd like to spend a bit of time thinking about them, too. View more posts